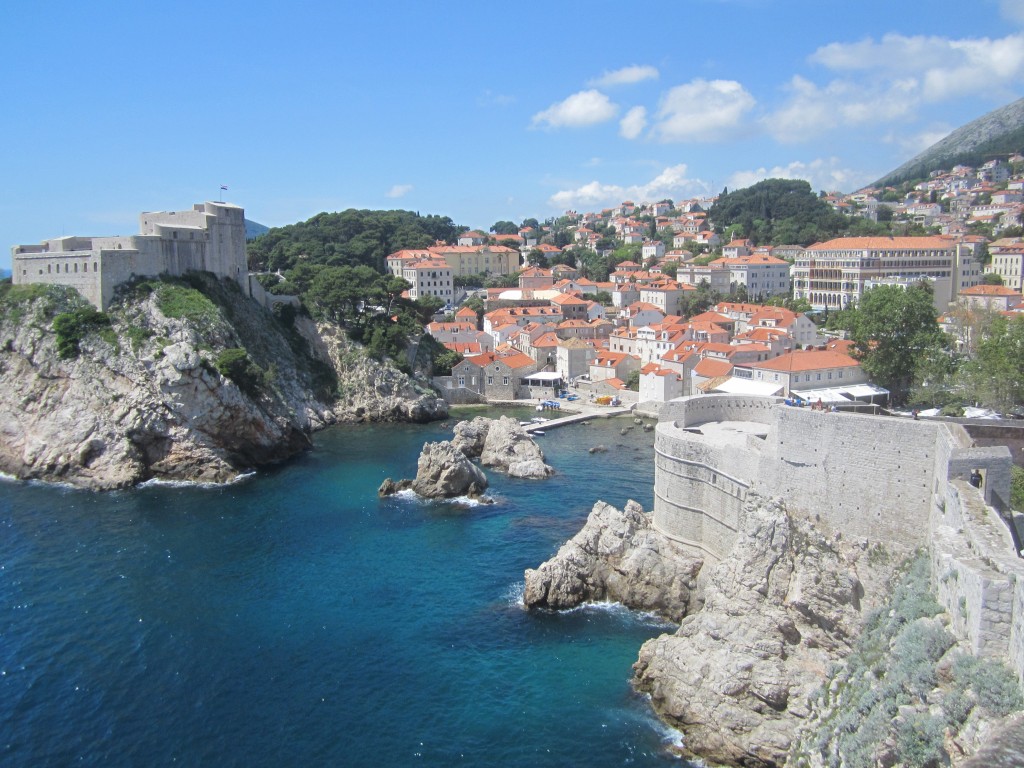 Walked the entire perimeter of the Old Town wall at Dubrovnik, Croatia

We have had the pleasure of visiting the Montenegro and Croatian coast twice and both times we were overwhelmed with the beauty of the Mountains, Beaches and Sea. Last month Milan, our neighbor and operator of the European Tonewood business (see previous post), was our guide to the coastal city of Budva. Budva is one of the oldest cities on the entire coast, with history dating back 2500 years. The current Old Town of Budva has fortress-type walls that encircle a pedestrian-only city dating back 1000 years. All of the streets are narrow and the stone sidewalks are smooth from age and wear. It was a fun place to visit, lots of shops, resturants, churches and homes. It’s like a maze, walking through the narrow streets with the buildings on all sides 3 and 4 stories high. 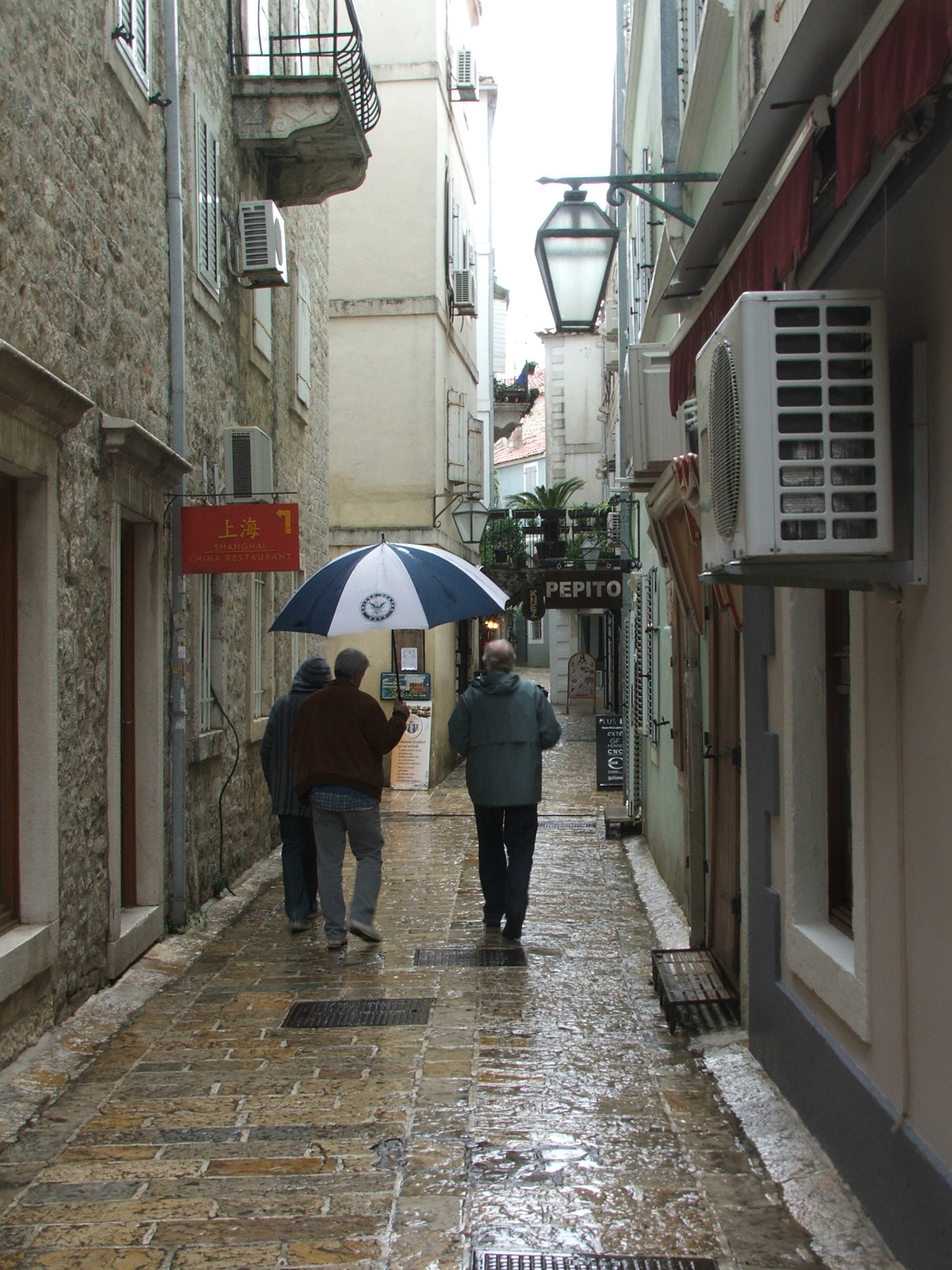 This is in the Old Town of Budva, pedestrian only streets

The beach areas at Budva are “The” place to go in the summer. Called the Budva Riviera, thousands of tourists flock to the pebble sand beaches increasing the density of the city exponentially. It’s Montenegro’s Miami Beach. Fortunately for us, we were there on a slightly rainy early spring day and had the place to ourselves. At lunch time we walked the path along the harbor past numerous restaurants and stopped to read the posted menus. The maitre’d  would come out in the rain and tell us about his restaurant, very politely, no pressure sales. We finally just picked Jadran (Adriatic) and had a great lunch much to Mike’s delight. 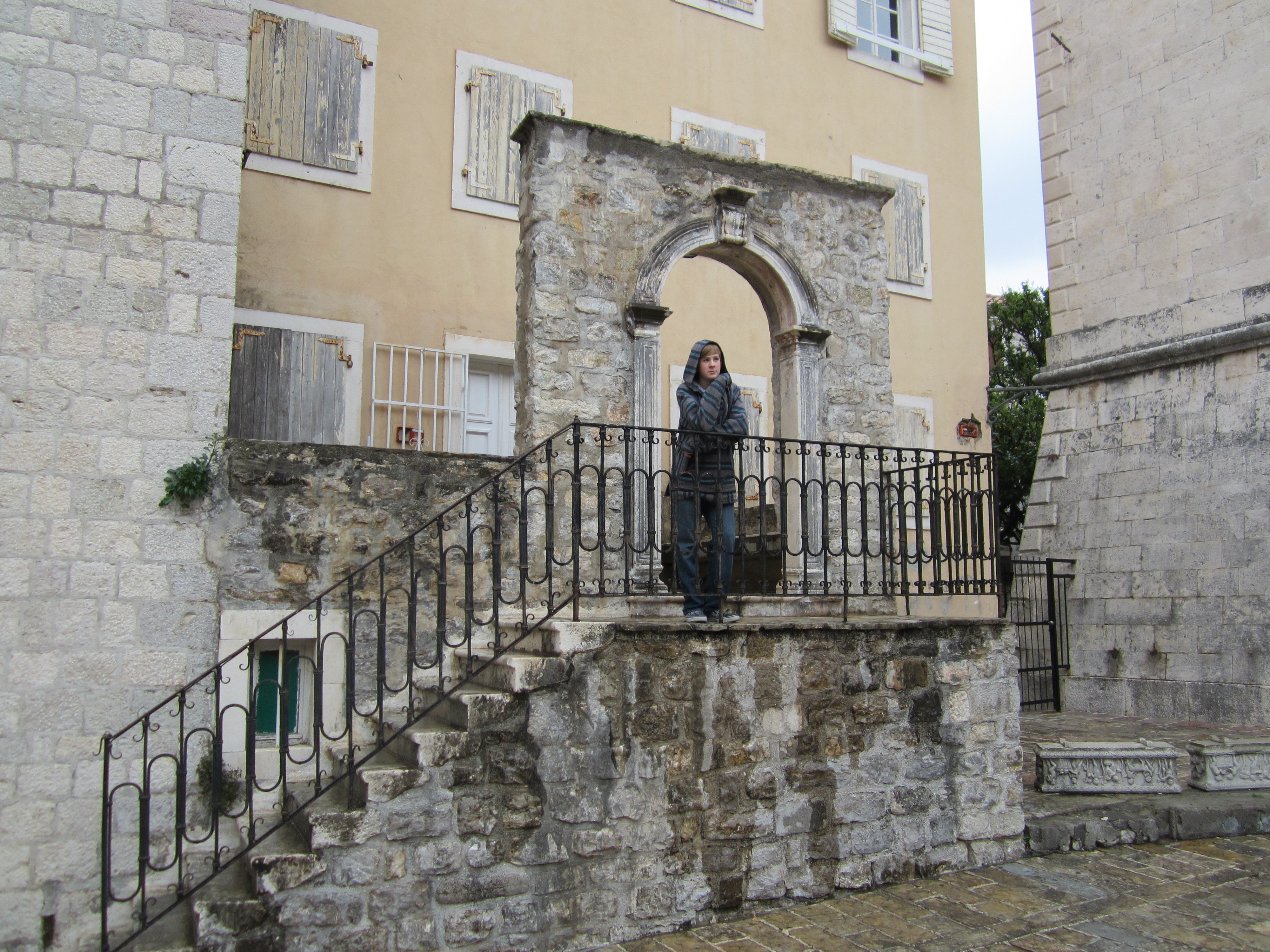 In Budva, Mike found a centuries old Entry but no one was home

About 10 minutes south of Budva is Sveti Stefan and the Villa Milocer. God’s paintbrush is manifested here as the azure blue Adriatic Sea meets the almost pink pebble sand. The mountains rise up immediately with a thick forest of olive trees. As we walked along the Queen’s Beach Mike asked if this is what Heaven is like. (It had something to do with the scent of wisteria.) We found an area of beach that had perfectly flat, fist sized pink stones and skipped quite a few across a perfectly flat ocean. 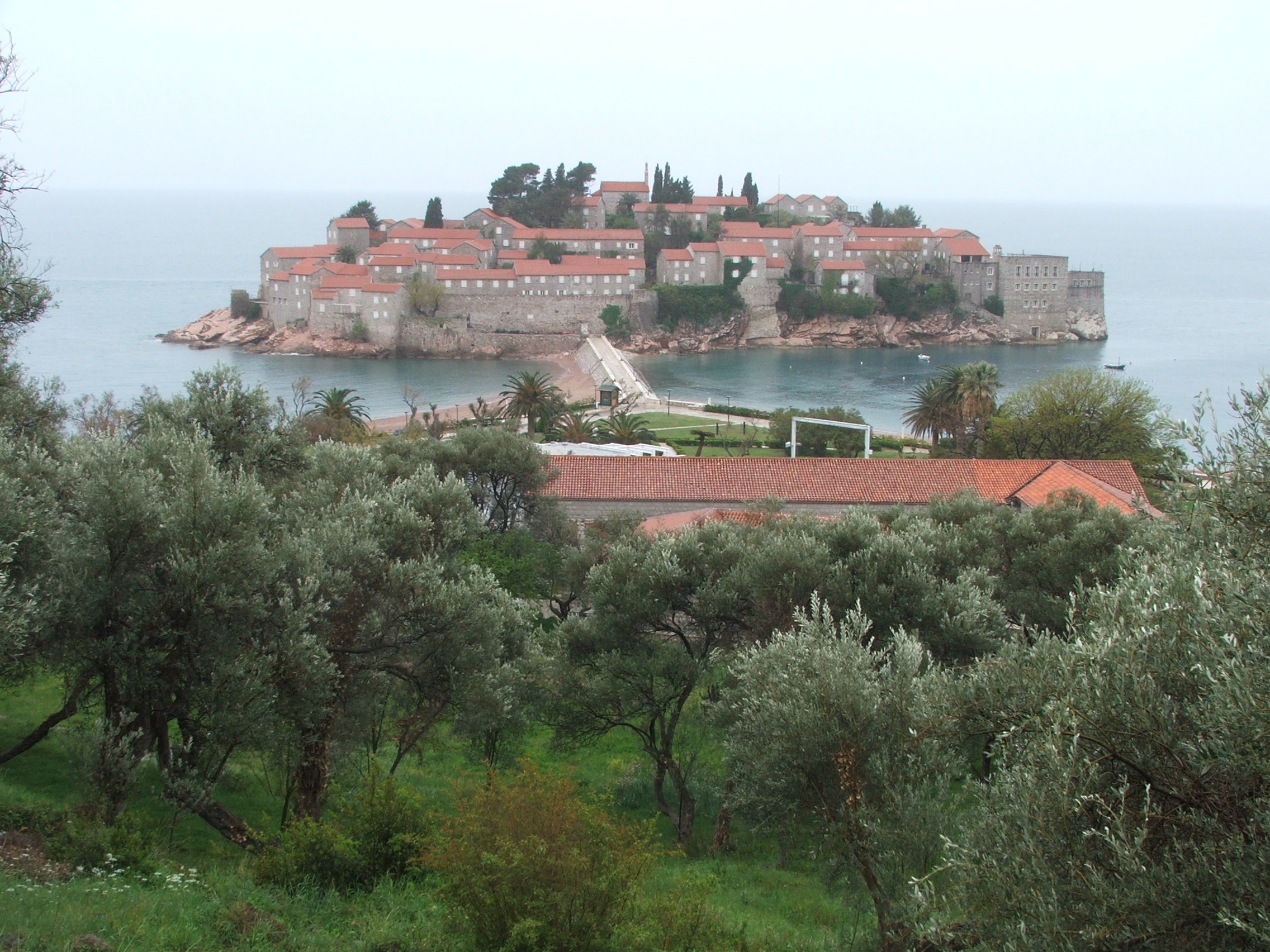 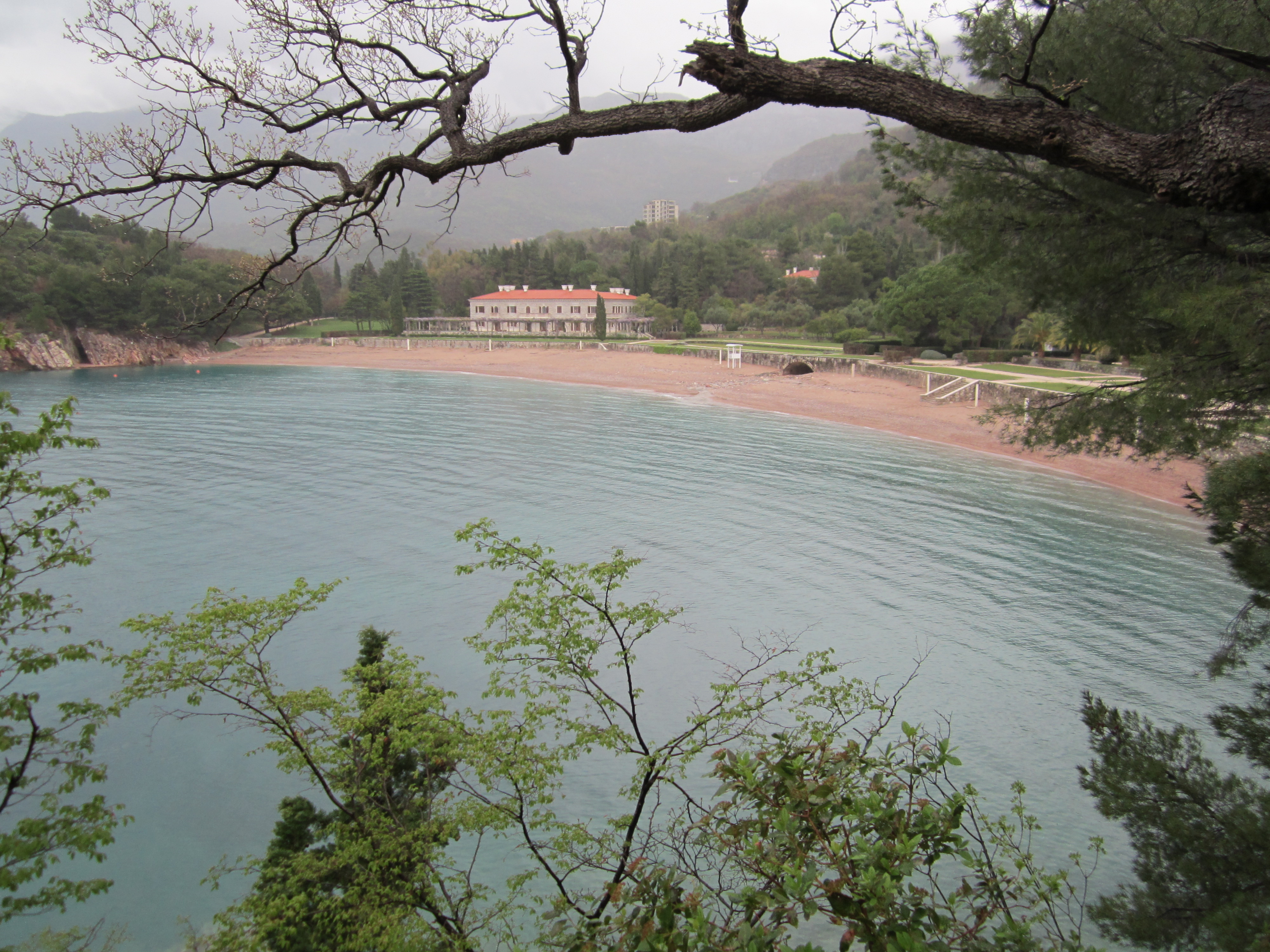 The entire island of Sveti Sefan and the Villa Milocer are part of the Aman Resort and has no problem living up to its 5-star rating. Intricate stone work and wisteria surrounds the Villa and the fragrance can be noticed right down to the water’s edge. 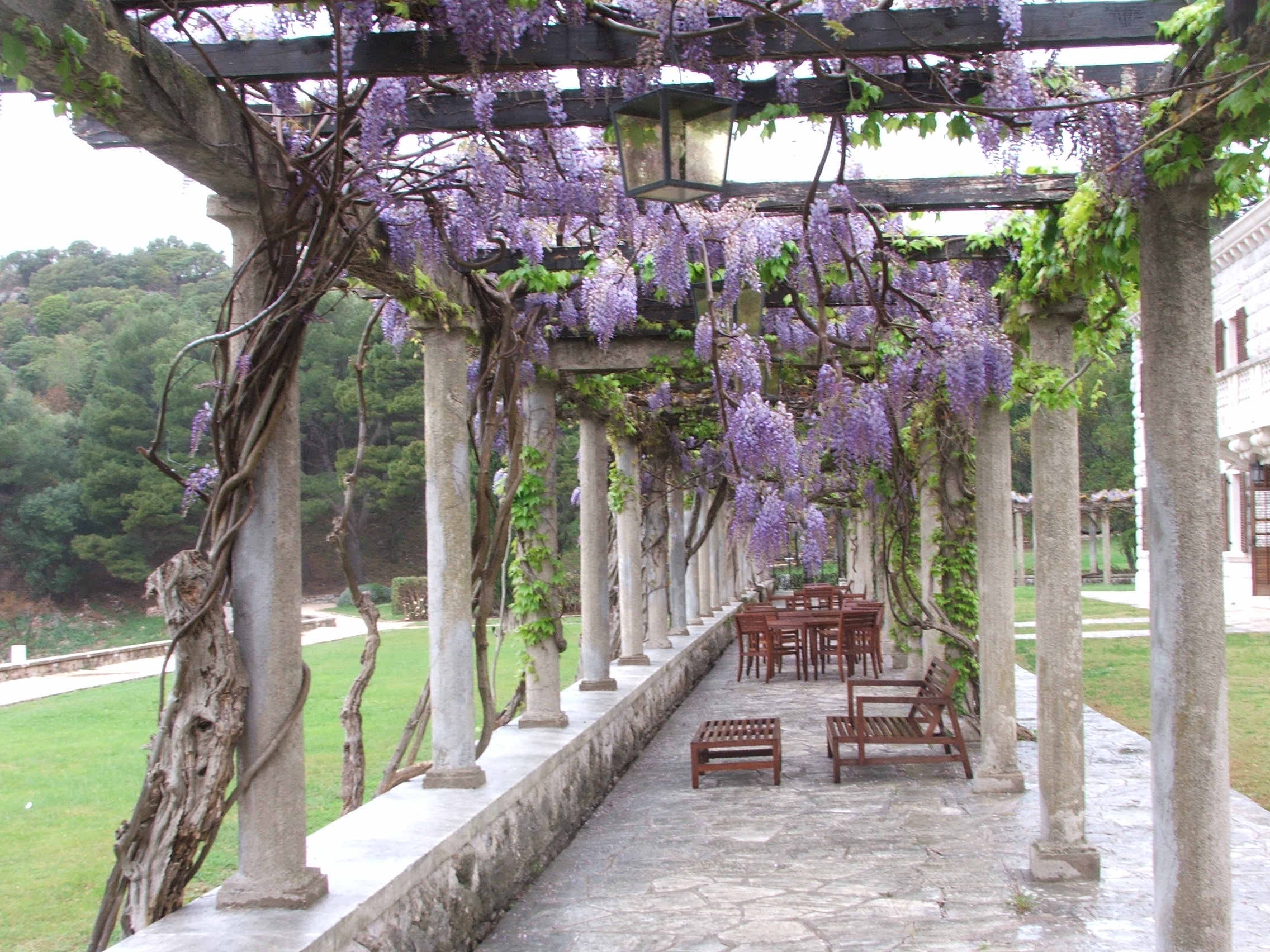 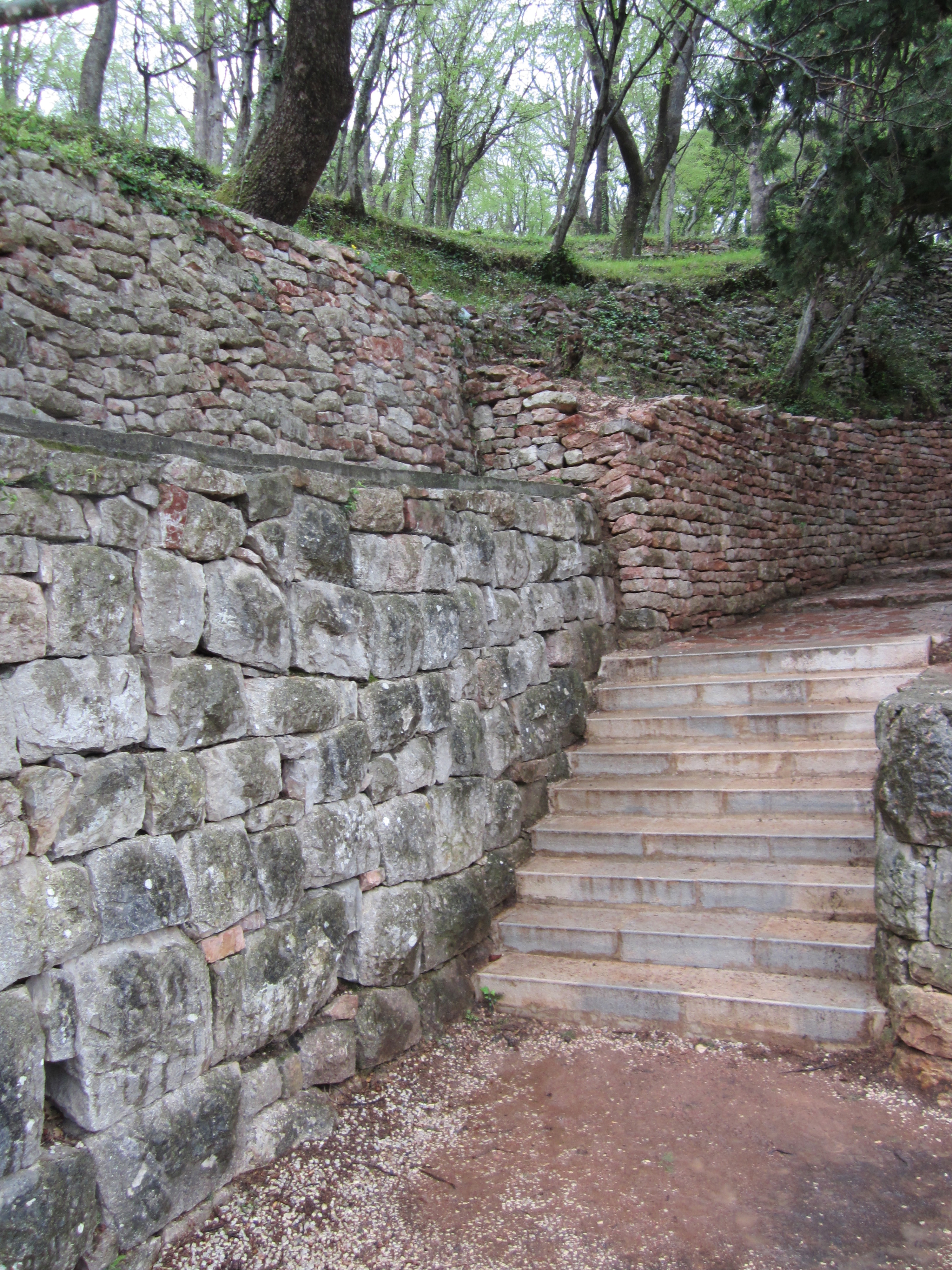 Typical walks and walls around the Villa

On our trip to Croatia, the giant walled-city of Dubrovnik, it was a crystal clear day.  I thought it was overcrowded with tourists. I’ve since been corrected. Apparently it wasn’t even tourist season yet! Around 800 cruise ships visit the Croatian coast each year….most of them stop at Dubrovnik. It’s practically indescribable. It has an Old Town like Budva but is gigantic. It is a completely walled-in fortress city. We spent about 3 hours just walking on the perimeter walls. 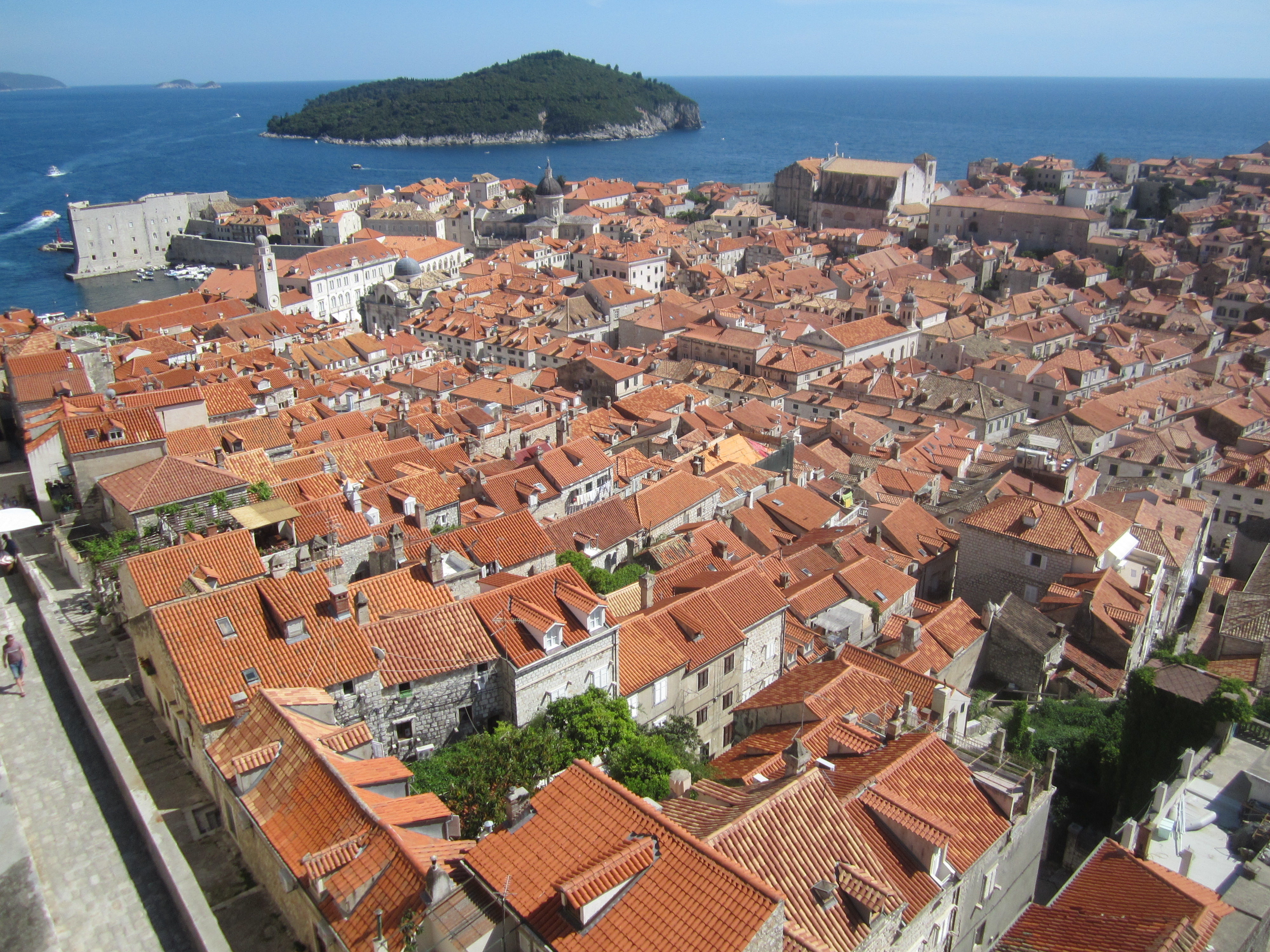 This city, like Old Town Budva, is a pedestrian-only city with hundreds of shops, cafes, restaurants, I think there are 5 churches, art galleries…..it would take you at least 2 days and evenings to discover Old Town Dubrovnik completely. It makes me wonder what it was like to live here centuries ago 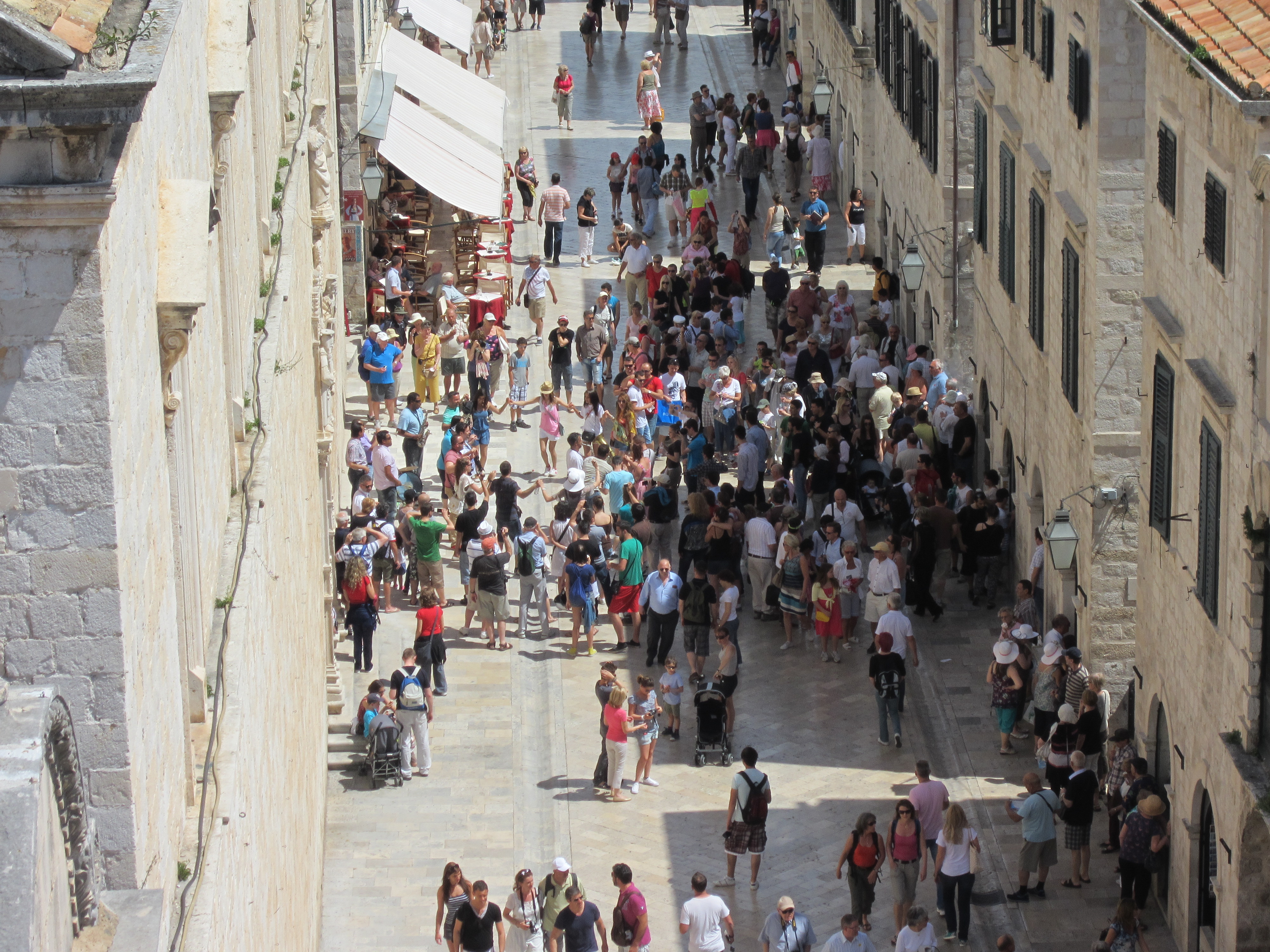 Live music and dancing on the main street in Dubrovnik

Milans daughter, Jovana, a second year university student majoring in journalism had never seen Dubrovnik, so she came along and was a big help at the border crossings. She speaks English very well. And she enjoyed all the picture taking, she wasn’t embarrassed to be a tourist. 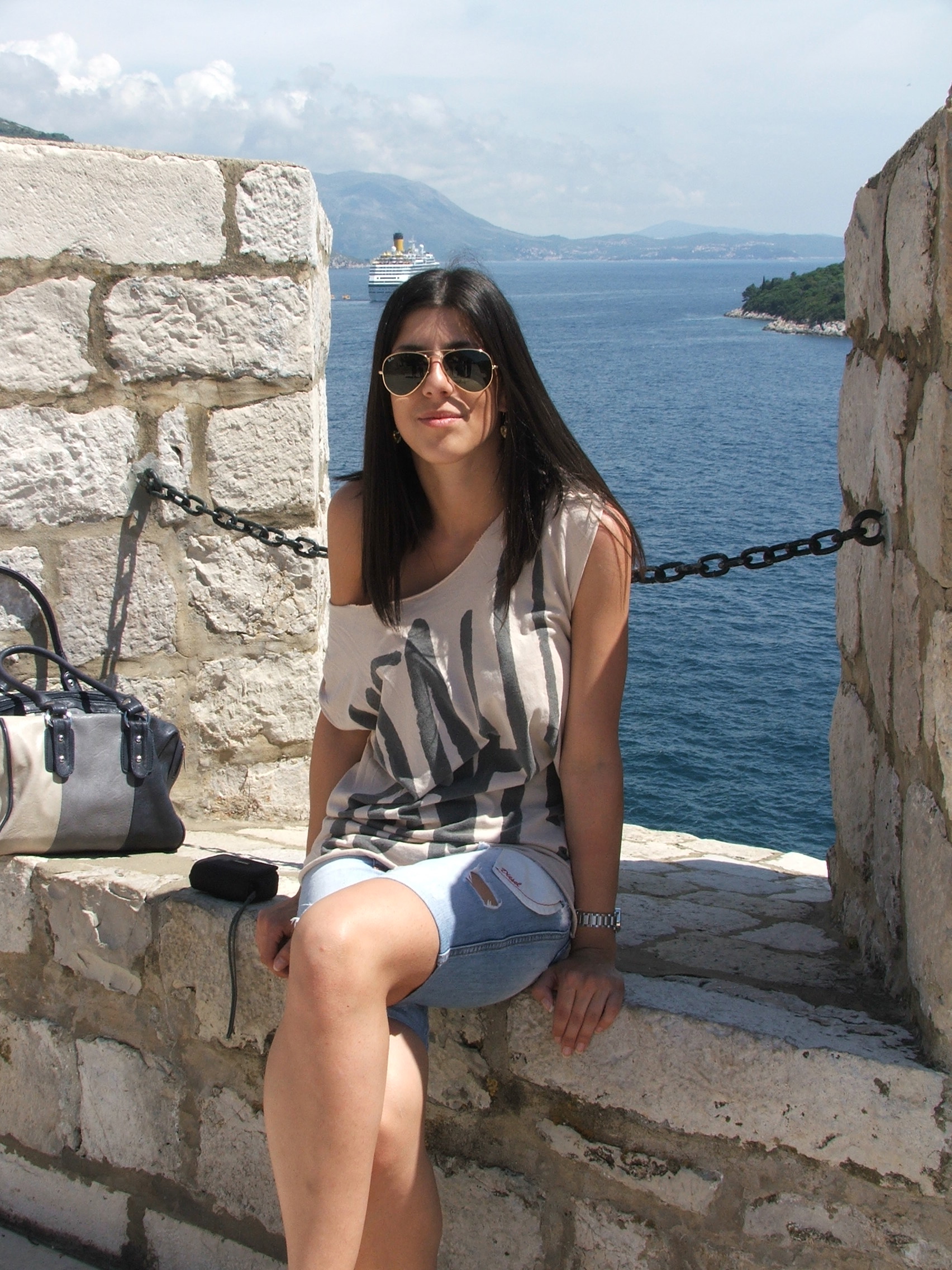 Jovana helped to interpret when needed 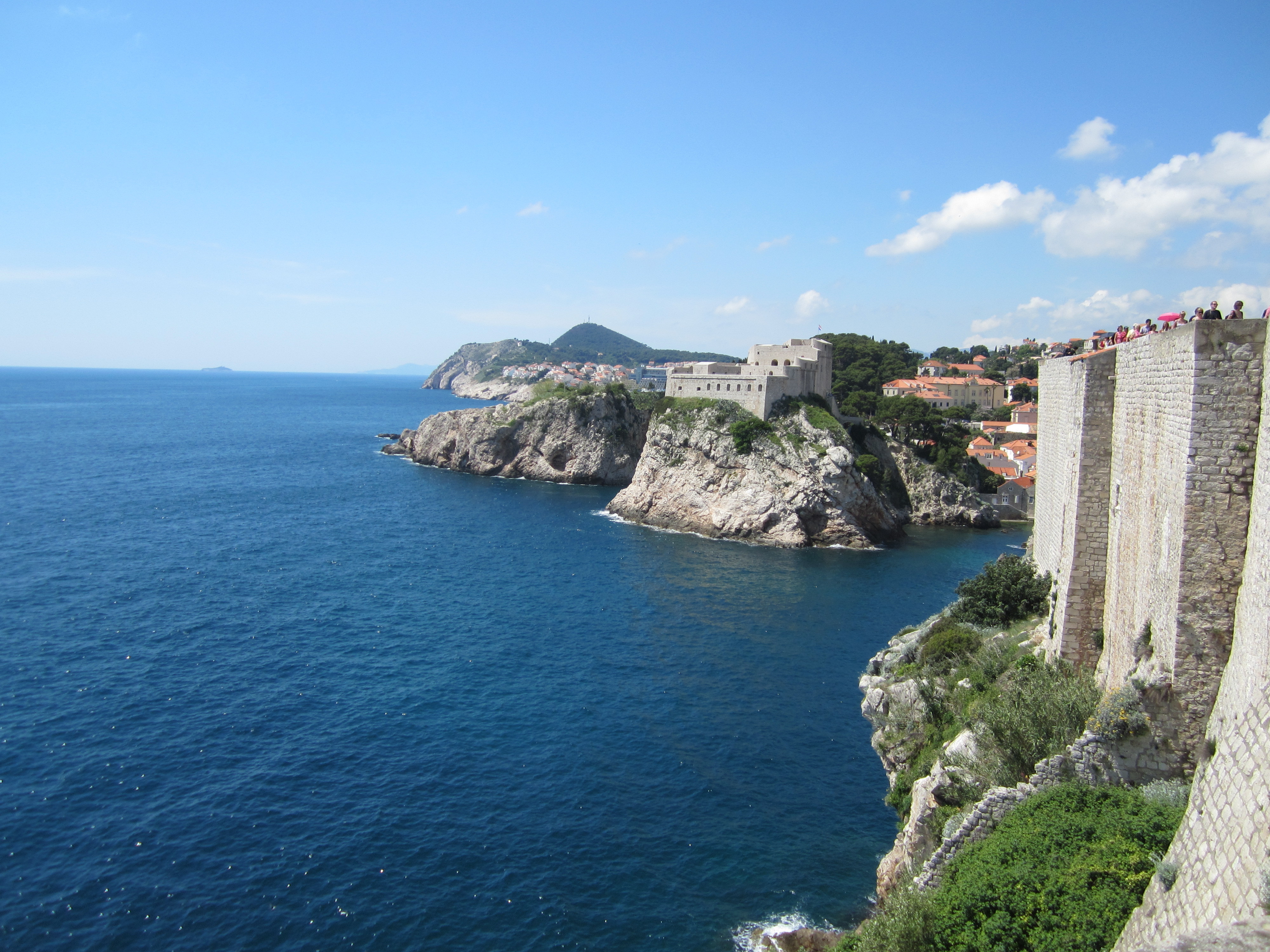 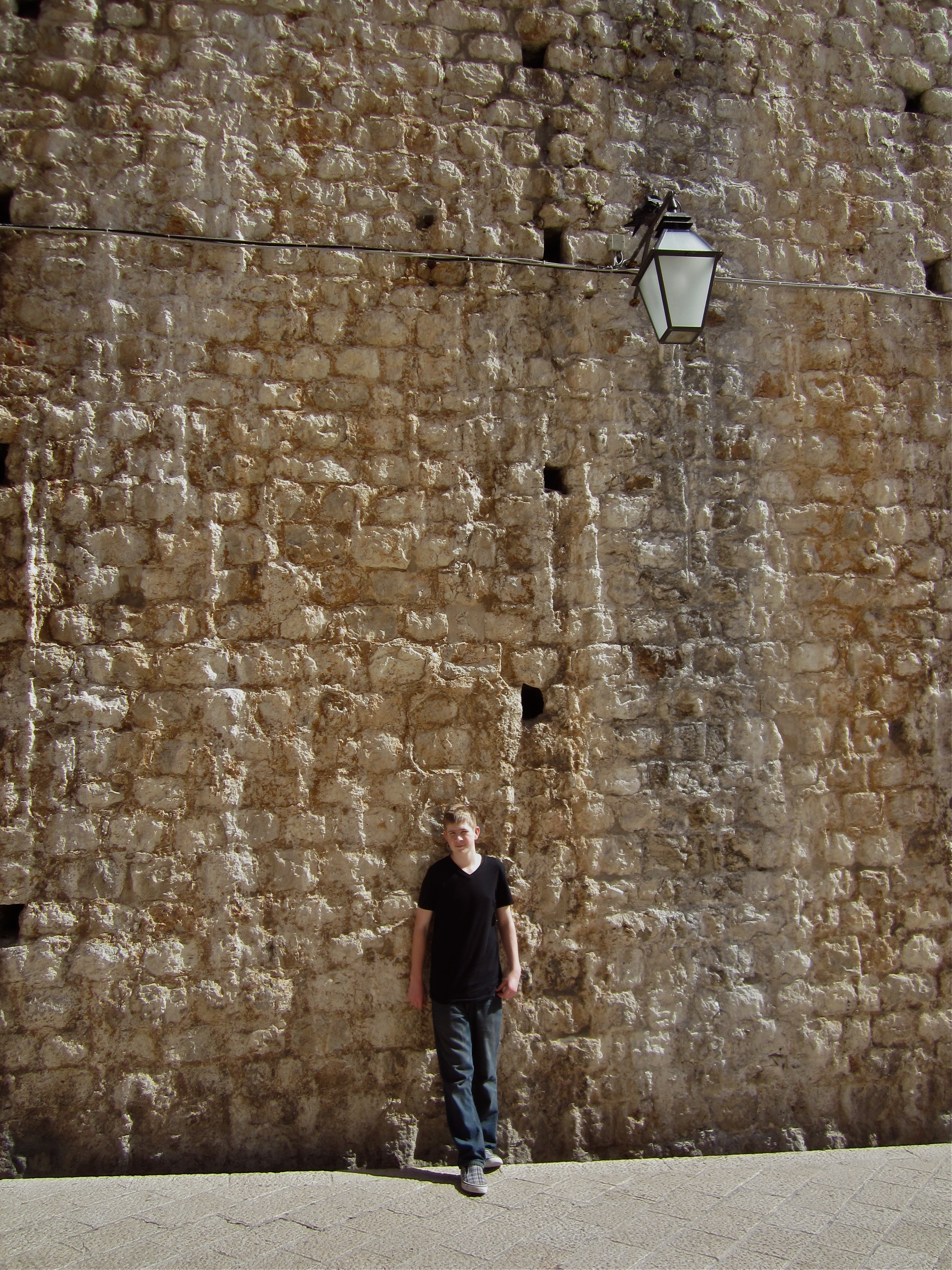 Mike relaxing next to a typical Dubrovnik street wall

Stone is the ubiquitous building material on the Balkan Peninsula.  It is seen in an amazing variety of patterns, textures and configurations.  The limestone streets of Dubrovnik are honed to a smooth patina by years of foot traffic.  The wall behind Mike had a beautiful warm glow.  Some of the rough stone walls have become home to plants. 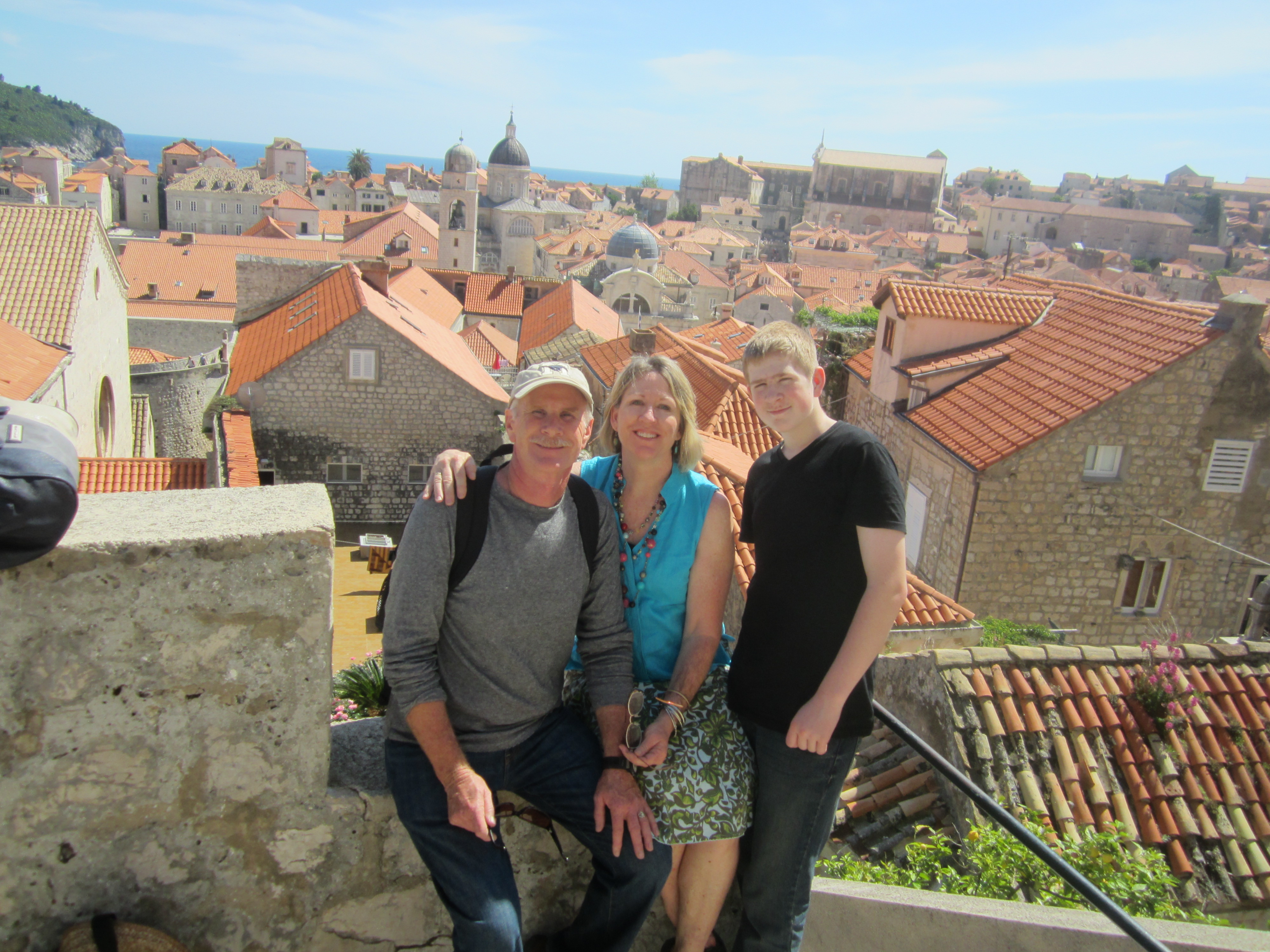 2 thoughts on “The Coast of Montenegro and Croatia”